A description of the Farhi Houses

In 19th Century Damascus, Raphael el Muallim Farhi lived in a one of the most opulent houses of Damascus. The following map of Damascus (the old walled city), shows three Farhi houses (119, 120 & 277), the Liniado (268) and the Lisbona (4941). From this city plan, the Muallem Farhi house was indeed the largest of them all. It is located off Al-Amin street.

These houses were the home of many families, family sharing one of the 7 court yards. Eventhough the outside appearance and first courtyard were non descript as not to attract the attention of the general public, the subsequent coutyards and housing were very well decorated with water fountains, trees (the fruit tree was a symbol status) and gilded ornaments. From testimony of Farhi who lived there not as long ago as the World War II period, each Farhi family had a court yard. The living room faced the courtyard and the bedroom quarters were relegated to the back facing the outer walls (usually without large windows). 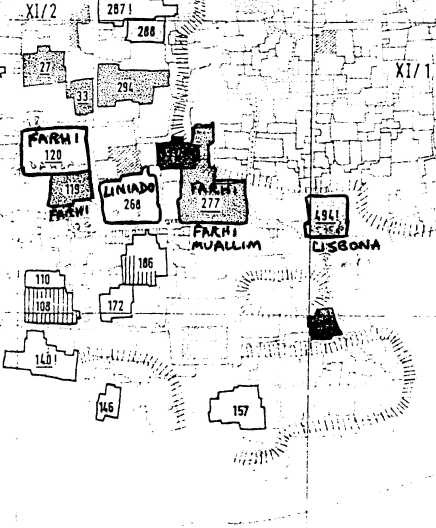 In his book Land of the Bible, visited and described (1847), John Wilson wrote that :

We visited the House of Mourad Farhi, one of the princely mansion of the Farhi, the richest bankers and merchants of Damascus. He recalled visiting the Library which contained the whole body of Jewish literature except some of the additions which have been made to it in Europe within the last quarter of a century. The library was open to all Jews of Damascus to visit and use. Four chief rabbis odf the congregation and a few respectable persons waited upon us at this place and heartily welcome us to Damascus.... (page 334). Note from the editor. The Mourad House is known today as the Dhadah House.

On the 8th of June , we visited the mansion of Raphael, the chief of the Farhis. We were told that in the Household lived about sixty to seventy souls. This establishment is even grander than that we visited yesterday (Mourad' s house). The roof and walls of the rooms which are situated round the court like those already noticed are gorgeous in a high degree. One of the British traveler expressed his doubts whether those in our own Royal palaces are superior to them. One of the principal apartments, the Hebrew inscription , adverting to the magnificence of the place and invoking the blessing of God on the proprietor is cut, painted, and gilded in large letters.... (Note, the current occupant of the house had these inscriptions covered by newspapers). We visited Raphael, the Nasi of the Damascus Jews in his private room... From his room, we went to his library which, like that of his relative already noticed, is of considerable extent. It is sometimes used as a private synagogue. It contains three beautiful rolls of the law, in the richest silver case which I have yet see enshrining the books of Moses and a copy of the Bible about 450 years old most splendidly illuminated and coloured. The latter manuscript is the finest which I have noticed during my residence in the East. It is certainly worth a thousand pounds; but it was procured for a much smaller sum.

The premises of Raphael Farhi are like a little village; and it strikes me that notwithstanding the deference which is accorded by all their inmates to the patriarch of the family, and the good order which is observed, domestic comfort, in the European sense of the term, must be considerably impeded by the number of different ages moving to and from in the courts. The ladies themselves made a busy scene of it, trudging along in their high patterns or calling to another from one side of the quadrangle to the other. They seemed , however to cultivate great kindness , as well as volubility of address, when summoning the attention of their companions. The name of Sarah, Rebekah, Miriam and other, fell like music on our ears; and in the persons of those who bore them we saw the forms which or imagination associated with Hebrew mothers and daughter on whom they were first bestowed.... (page 341)

Circa 1843-1844, a French photographer, Joseph Philibert Girauld de Prangey, travelled to Damascus and took the first known photography of one of the diwans (outdoor seating area) of the Muallem Farhi house.

Brigit Keenan in her book Damascus published in 2000 by Thames & Hudson Ltd, London, UK , describes the Farhi houses. Several pictures taken by Tim Beddow (and copyrighed by Mr. Said and his charitable trust Safingest) shows how magnifiient these houses were and how some are in a sad state of neglect. A great 1873 painting by Sir Frederic Leighton " La Ceuillette des Citrons" shows the courtyard in its glorious day with two women and a girl (probably Gilsom Farhi the grandmother of Jaqueline Tawil born Elia) picking up lemons from one of the courtyard's tree. The painting owned by the Leighton Trust was shown at the Royal Academy of Arts in London. It was sold at auction in the 1990's to an anonymous buyer.

The Mourad Farhi house, which has now renamed Beit Dahdah by its current owner , an art dealer, is shown in the following pictures. The page numbers refer to the Keenan book. 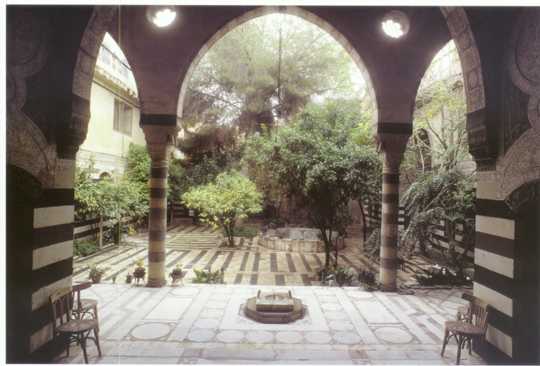 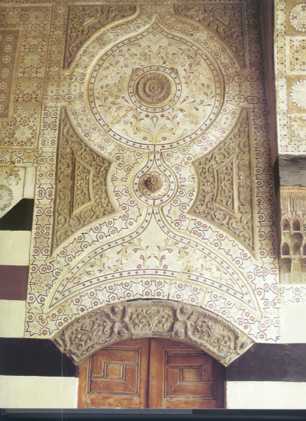 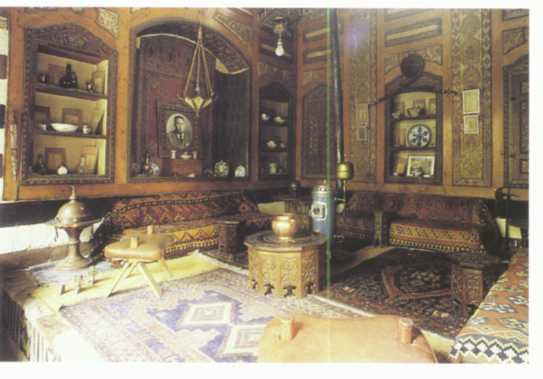 The Raphael el Mouallem House which was described by Lady Hester Stanphope as one of the largest House of damascus with its four inner courtyards had vivid gilded walls, painted ceilings with inlaid precious stones and mosaic floors. she was served coffee in cups with solid gold studs. It is now occupied by several families of modest means and is in need of repairs and restauration. According to people who lived there in the 1940's, It had 5 kitchens and hammams (Turkish baths). 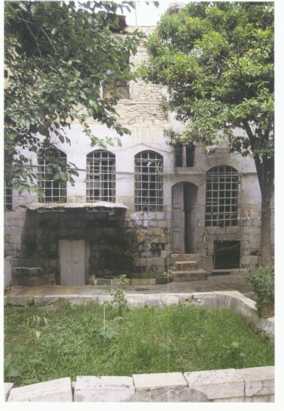 Beit al-Muallim Farhi: one of the four courtyards (page 94) 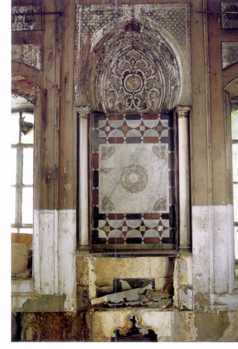 Julie D. Bouchain, in her 1996 thesis entittled "Auf-und Abstieg der Familie Farhi 1740-1995" (On the descendance of the Farhi Families 1740-1995) Hamburg University, has included the following pictures with captions. 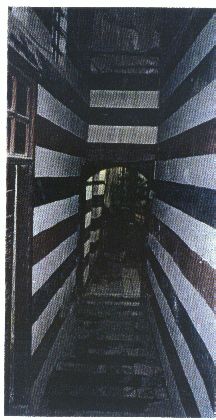 The entrance of Beit al-Muallim Farhi.On the left of the picture, the door to the guest room where visitors were received. They were not admitted to the main courtyard and therefore could not see the family's real wealth. 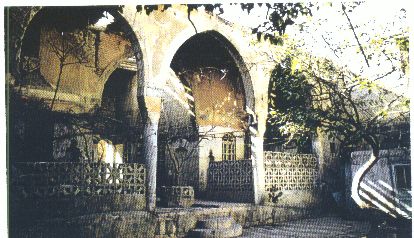 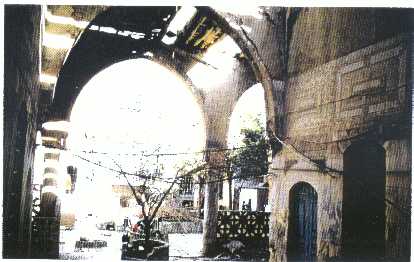 The courtyards of the Beit al-Muallim in February 1994: allegedly the birthplace of Sarah (Widad) and Alice nées Shalabi aka Farhi who inherited their father's claim on the property by squatting it after 1948. Widad died in November 2006 and Alice in September 2019. 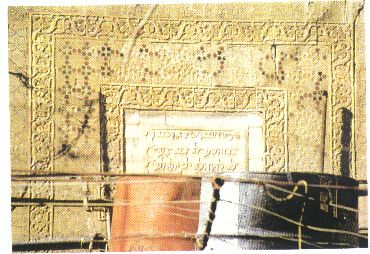 Behind the water tanks of the Syrian and Palestinian families living today in the rooms of the dilapidated Beit al-Muallim, the Hebraic inscriptions have been preserved. 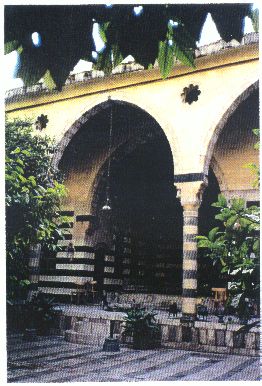 The inner courtyard of the Beit Mourad Farhi. 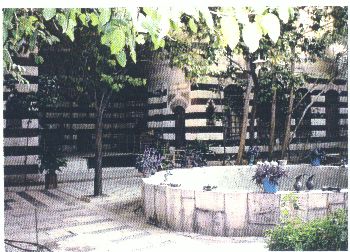 Beit Mourad Farhi is currently named the "Dahdah Palace". Today, it is the residence and antique shop of a wealthy Damascene. All references to the former residents have diseappeared; symbols and original wall carvings either have been carved out or are covered (with newspapers).

Najwa Al Quatan in her thesis: The Damascene Jewish Community in the Latter Decades of the 18th Century: Aspect of Socio Economic Life based on the Registers of the Shari'a Courts (published in 1992 by Berliner Islamstudien Bd.5, Franz Steiner Verlag in Stuttgart), reports many land and houses purchases by the Farhi family in the late 18th century Damascus, here are a few listed:

We assume that the large Farhi houses may be some of those purchased by Salomon and his family. As an indication of value, dwellings were rented for a few ghurush a month.

The Beit Mourad Farhi palace also known as Beit Dahdah may have been sold to the famous scupltor Mustafa Ali.

The Raphael El Mouallem complex has been purchased by an architect. He plans to restore it to its past spendor and convert it into a luxury Hotel.

Out of the 24 Farhi residences in old Damascus, one Farhi house (squatted ca 1948 and allegedly owned by Hediyah & Rosa Shattah - maternal first cousins of Widad & Alice Shalabi aka Farhi) has already been "gentrified" and converted into the Talisman Hotel. Its web site was taken off line and replaced only by reservation sites. Photos of the hotel can be viewed online.

In Damascus, Restoring Beit Farhi and the City's Jewish Past, by Tim Beddow in the Smithsonian Magazine June 10, 2009

The Raphael El Mouallem complex has been purchased from Hakham Roukbi (the architect that started the renovation project) by the Asfari family and new efforts made to document its history. Inauguration of the Hotel is still a year away.

Hakham Roukbi and Elizabeth Macaulay Lewis of City University of New York (CUNY) have taken many photos of the decorations and frescoes of courtyard (also shown above behind the water tanks in an earlier photo).

The French translation of the text is:

The English version is

May you be blessed on arrival and blessed be you departing
Through this door No misfortune will happen to
neither old man nor young child nor young man nor anybody else.

In light of the current situation in Syria, inauguration of the Hotel is still years away.

The architecture and history of the Beit El Muallem Farhi are the subject of a book named Bayt Farhi and the Forgotten Palaces of Damascus - Minority Architecture in Late Ottoman Syria. At the request of Professor Macaulay Lewis, the pictures of the frescoes of the Pink Library and their translation have been removed temporarily from this page until the book is formally published in 2016.

The late Joseph Elia emigrated from Damascus in 1920 and in 2000 drew a map of old Damascus from memory. His daughter, Jacqueline Tawil submitted it this month.

The following map of 2012 shows the famous houses in Old Damacus with their new names shown .

Prof Elizabeth Macaulay-Lewis had published a 336 page illustrated book Bayt Farhi and the Sephardic Palaces of Ottoman Damascus . It is available at ISDistribution.com and other online resellers. With the permission of their authors, the pictures of the frescoes of the Pink Library during and after restoration as well as their English translation are shown below.

The texts of these frescoes have been translated and shown in the following table. Isaac Salmassi helped in the transaltion of the Arabic text. Mathilde Tagger and Yocheved Klausner translated the hebrew ones (the translations are from the Koren Bible, the English text revised and edited by Harold Fish, Koren Publishers Jerusalem 1977).

A conversation between Dr. Elizabeth Macaulay-Lewis and Dr. Steven Zucker on Bayt Farhi, a Sephardic palace in Ottoman Damascus. (7 1/2 minutes)

Beit Farhi: Jewel of the old city of Damascus

History of Beit El Mouallem by Lyn Julius in her blog: Point of No Return